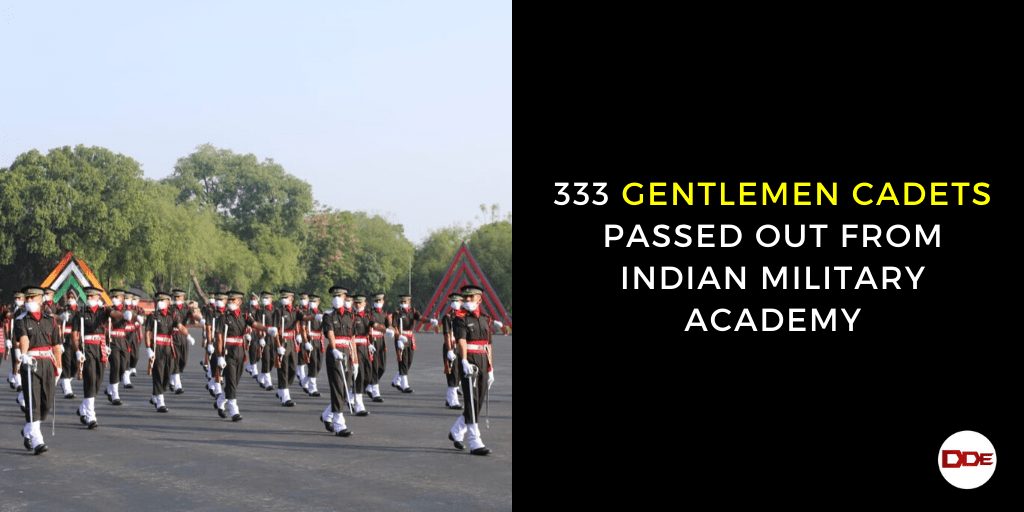 The Indian Military Academy (IMA) in Dehradun held the Passing out Parade (PoP) for the 146 Regular Course and 129 Technical Graduate Course on Saturday. This was the year’s first passing out parade which saw 333 Indian and 90 Gentlemen Cadets from nine foreign countries become army officers.

The Chief of Indian Army General Manoj Mukund Naravane reviewed the officers of the passing out parade.

Notably, it was the first time that the parents and relatives of the gentlemen cadets were not in attendance at the event due to the COVID-19 outbreak.

Concerning the COVID-19 pandemic outbreak, the IMA had said that all precautionary measures to cut the virus spread have been taken for the June 13 event, and, this is the reason that for the first time, parents and relatives of the cadets have been advised to watch the live coverage of all POP events on media to feel part of the celebration and the pride associated with it.

This was one of the major reasons why the Indian Army decided to broadcast the parade live on social media.

The parents or relatives of cadets usually pip-in the ranks on the shoulders of cadets after the passing out parade. This year, the ranks would be put on by instructors or families residing within the academy premises.

The passing out parade symbolizes the culmination of rigorous training and transformation of a gentleman cadet into a young officer. This time a significant part of their training was conducted with new rules and precautions.

An emphasis was provided on increasing the immunity of these cadets. They were also given the occasional allowance to watch television for a while and to talk to the housekeepers on the phone to reduce their mental stress.

Due to the IMA’s discipline and resolve, it is said that here has not been a single case of infection at the academy. This year there will also be eight groups of cadets instead of the usual 10, who will stand two metres apart instead of the normal half a metre distance.

Every six months, the IMA organises a passing out parade for its cadets who join different arms and services of the Indian Army while the foreign cadets go onto join the armies in their respective countries.