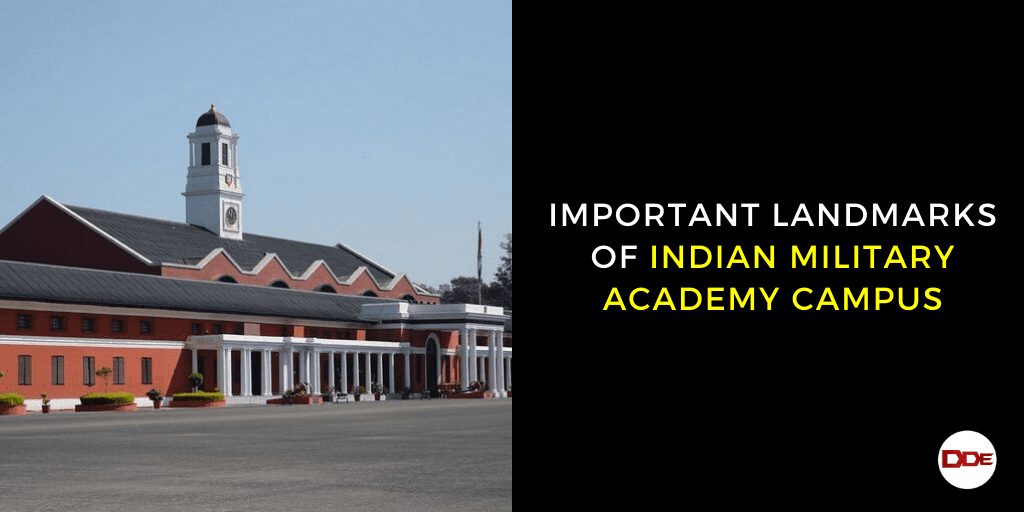 The Indian Military Academy (IMA), Dehradun is one of the premier Institutions of the Country training Gentlemen Cadets for commission into the Indian Army. The Academy is known for its glorious history. Its dynamic efficiency and valiant traditions are not only an integral part of the Nation‟s proud heritage, but also form an indispensable sheet anchor of independent India‟s national security.

Through the portals of the IMA with the Credo „Veerta Aur Vivek‟ pass out the future Army Officers of the Indian Army. The path of leadership of troops is paved with a challenging, exciting and an exacting service. The Military Academy is no soft option to glamour and heraldry. It is an austere Institution imparting rigorous training in leadership, self discipline and the art of war. The hallowed portals of this great institution boast of having bred the majority of the officer cadre of the Indian Army.

Let us see some of the landmarks of the Indian Military Academy (IMA) Dehradun :

The Chetwode Building : Though all the buildings in the campus are unique from the architectural point of view, the building that stands out the most is the Chetwode Building or Chetwode Block, named after Field Marshal Sir Philip Chetwode, the founder of the Academy. Built-in 1930, the Chetwode Building designed by RT Russell, an associate of Edwin Lutyens, is the Sanctum Sanctorum of the Academy. The Chetwode Building is an eclectic combination of Colonial and British styles. It has long corridors running in North-South and East-West directions. Its gabled roof with black wooden shingles has now been changed to pre – profiled colour coated Zincolium and its central Clock Tower adds height to its majestic façade. It houses the administrative headquarters and is also the hub of the academic training.

IMA Museum : The Chetwode Hall inside the Chetwode Block houses the Museum. Its dimensions are 130 x 48 feet with a highly polished sunken wooden floor, panelled walls and galleries all around adorned with exhibits and artefacts. Originally called the Dormer Hall, the Hall with its peculiarly groined arches reminds one of the insides of a Gothic Cathedral. Today, besides being a lecture hall it serves as a resting place of King’s Colours and State Forces Colours, as also for housing the Indian Military Academy memorabilia over the years.

IMA Library : In 1932, the IMA Library was opened in a classroom with 800 books, most of which were donated by Brigadier LP Collins, the first Commandant and Mrs Collins. In 1938, an additional library wing was added to the IMA Library. The foundation stone of this wing was laid by the then Commander-in-Chief General Sir Robert Canels, on 25 November 1937. Today the library boasts of over 100,000 books besides reprography, digital books (i.e. digitised version of a set of 100 to 200 books packed in a book tablet), internet connection and kiosks for easier access to information. The Library is designed to provide the most modern and technical facilities to the readers in the near future.

Kingsley and Collins Blocks : The living quarters for Gentlemen Cadets (GCs) are a group of beautiful buildings with enclosed lawns. They combine the essence of barracks and the permanence and privacy of a hostel building. Today, with manifold growth of the Academy and greatly increased strength of GCs, they accommodate only one of the five Battalions, with the other four located in the South and Tons Campuses respectively.

Nizam Pavilion : Nizam pavilion is named after Asaf-Jah- Nizam-ul-Mulk, the former ruler of the erstwhile princely state of Hyderabad, who had donated `5000/- towards its remodelling. The Pavilion was intended to provide dressing, changing and refreshment place for the sports teams visiting the Academy from the universities, schools and other institutions in India. The Pavilion is flanked on its right side by another building which serves as an Officers’ Institute and on its left is an open structure with Corinthian pillars which is a multipurpose hall as well as a dance floor.

Khetarpal Auditorium : The Auditorium with a seating capacity of 1400 was constructed in 1982. It is named after Second Lieutenant Arun Khetarpal, a recipient of the Param Vir Chakra (PVC (Posthumous)) for his outstanding valour during the 1971 Indo-Pak War. Commissioned into The Poona Horse on June 1971, he was the youngest officer to be awarded the PVC. His bust, with a citation of his heroic deeds, is located in the foyer of the auditorium. The Khetarpal Auditorium is one of the largest auditoriums of North India.

Hoshiar Singh Gymnasium : Inaugurated on 09 February 2009 and named after Maj Hoshiar Singh, PVC, it is, in fact, a mini indoor stadium 50 x 40 meters with a seating capacity of 1400. The hall has a state of art weight training facility, besides facilities for basketball, volleyball, handball and boxing.

Vikram Batra Mess : The central Gentleman Cadets Mess which can accommodate 1200 trainees and be formally inaugurated on 23 June 2010 by Gen VK Singh, PVSM, AVSM, VSM, ADC, Chief of the Army Staff. Named after Capt Vikram Batra, PVC, Hero of Tiger Hill battle, part of the Kargil war, the mess has impressive entrance and has a striking feature in the form of the bust of Capt Vikram Batra.

War Memorial : The War Memorial of the Indian Military Academy was inaugurated by Field Marshal Sam Manekshaw on 17 November 1999. The architectural style of the memorial is in consonance with the original structures of the Academy with the façades replicating the Chetwode Tower. Its pillars and arches of monolithic Dholpur Stone complement the structure. The Sanctum Santorum is a seven and a half feet bronze statue of a Gentleman Cadet saluting with a sword. To the rear of the statue is located an Amphitheatre and to its flanks, are designed arches on which are etched names of the valiant alumni who have made the supreme sacrifice.