Operation Meghdoot : This Day That Year At Siachen Glacier 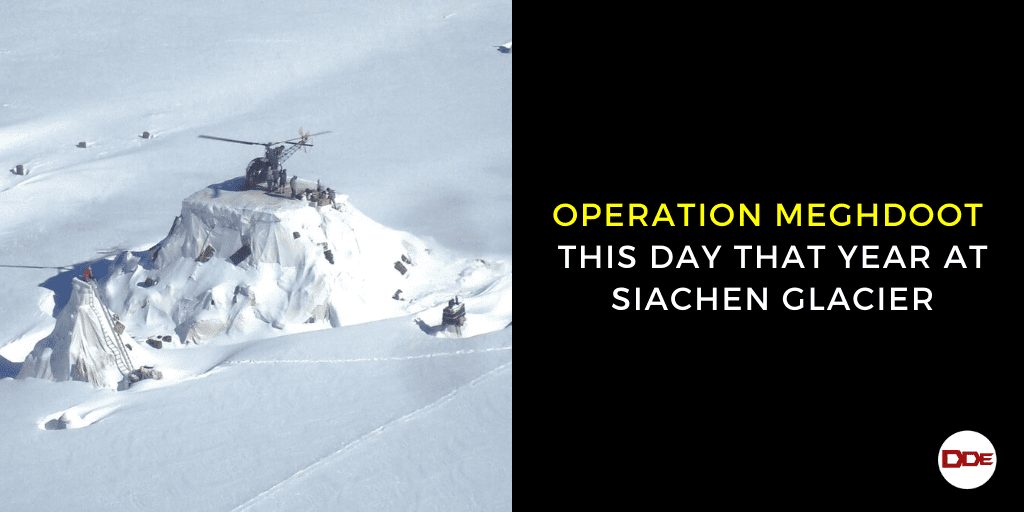 Operation Meghdoot : This Day That Year At Siachen Glacier

Operation Meghdoot This Day That Year at Siachen Glacier. The festival of harvest, Baisakhi is celebrated in the northern parts of the country mainly Punjab today. The festival has a special significance as it has witnessed some major historical events unfold. In the year 1699 on the day of Baisakhi, the tenth Guru of Sikhs, Guru Gobind Singh had formed the Khalsa Panth of warriors to protect the people from religious persecution by Muslim rulers.

The festival also witnessed another major historical event on April 13, 1984, when the Indian Armed Forces launched an operation code-named Operation Meghdoot to capture the Siachen Glacier. The dispute regarding the Siachen Glacier had its root in the 1949 Karachi Agreement signed between India and Pakistan supervised by the United Nations Commission for India and Pakistan (UNCIP) which established a ceasefire line in Kashmir. Under the 1949 Agreement, the easternmost part of the ceasefire line was not demarcated beyond a point called NJ9842 and the territory between NJ9842 and the Chinese border was left unmarked. As a result, both the countries asserted their claims to the unmarked territory by allowing expeditions to the area. When Pakistan granted permission to a Japanese team to scale up an important peak in the area, the Indian government grew suspicious.

To put an end to Pakistan’s attempts to assert its claim over the territory, the Indian government decided to deploy troops at the Siachen glacier. As part of the preparations to deploy troops at the glacier, troops were sent on a training expedition to Antarctica in 1982 to acclimatise the troops to extreme temperatures. In 1983, fearing that India might capture the important ridges and passes near the glacier, the Pakistani Army decided to send their troops first and ordered Arctic-weather gear from a London supplier not knowing that the same supplier had provided outfits to India.

As per Intelligence reports, Pakistani forces had planned to occupy the glacier on April 17 and so to preempt the Pakistani forces, the Indian Army prepared a plan to control the glacier on April 13, 1984, way before the Pakistani Army. The operation named after Meghdoot (cloud messenger), a Sanskrit play written by Kalidasa, was led by Lieutenant General Prem Nath Hoon. Brigadier Vijay Channa, who commanded the task of occupying the Saltoro ridge chose the date April 13 as the day to launch the operation because it was the day of Baisakhi and Pakistan would be least expecting it. As preparations started, Indian Army soldiers were lifted by the Indian Air Force. During the first phase of the operation a full battalion of Kumaon Regiment and units from Ladakh Scouts, under the command of Lieutenant-Colonel (later Brigadier) D. K. Khanna, moved on foot to avoid detection of the troop movement by Pakistani radars.

By the auspicious day of Baisakhi, approximately 300 Indian troops had already occupied the key peaks and passes of the glacier and by the time Pakistani troops found out it was already a lost battle for them. Pakistan had more routes accessible through the ground to the area as compared to India which had to rely on air dropping, yet it could only manage to occupy the Saltoro Ridge’s western slopes and foothills. As no victory comes without its cost, though no reliable information is available on casualties, soldiers on both sides suffered frostbite, high altitude sickness with some getting lost in avalanches.

Our brave soldiers continue to guard the Siachen Glacier fighting the extreme weather conditions and the neighbouring enemy.

Walkthrough The Life Of Indian Army In Siachen