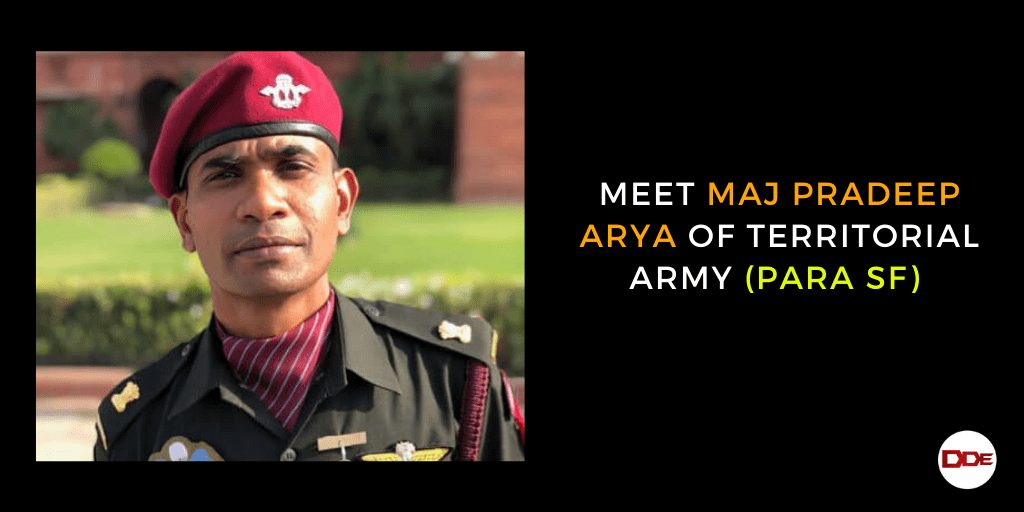 Meet Major Pradeep Shoury Arya, a special forces officer of the territorial army and the country’s first Indian Revenue Service (IRS) officer and Additional Commissioner of Income-Tax, Mumbai (Investigation Wing) who has been award Shaurya Chakra for his efforts in thwarting an infiltration bid in Kashmir.

Maj Arya was the mission leader tasked to form an intelligence network along the LoC in Baramulla district of Jammu and Kashmir.

On May 28, 2017, he was informed of a probable infiltration bid by the Lashkar-e-Taiba (LeT) around Chabuk in the 19 Infantry Division area.

Major Arya organised an ambush party and moved ahead to intercept the infiltrators.

“At around 10.30 pm on May 28, 2017, Maj Arya detected [movement] of 4-6 terrorists moving 200 m ahead in the nallah. Fearing the terrorists might slip away using the moonless night and dense jungle foliage, the officer and his troop showing pre-eminent valour moved ahead in the mined area to intercept them and immediately initiated a fire fight.”

“Displaying intrepidity at the risk of his life and cold nerves he closed in, and sited himself over a fallen tree overlooking the terrorists, Major Arya showing heroic initiative and inspirational combat leadership ran ahead from his concealed position, unmindful of his own safety and came directly in contact with the terrorists and eliminated them.

Maj Arya loved what he did for the country. He said, “When a shot is fired, the bullet does not change directions seeing an IRS officer before it. It goes through you.”

Why the Parachute Regiment? “Because I am an aviator — a trained pilot,” he said. For two months in a year, he serves in the Territorial Army.

In 2013, Maj Arya was the recipient of National Award from the President of India for Best Electoral Practices, instituted by the Election Commission of India, for controlling large quantity of cash during elections in Karnataka and Nagaland.

As part of the Special Forces, Northern Command, Udhampur, he had generated sufficient intelligence based on which special operations were launched for neutralising terrorists.

He was conferred the Chief of Army Staff Commendation in recognition for his devotion to duty and tracking money laundering and flow of funds for terrorism and anti-national activities in Jammu and Kashmir.

When asked how his family reacts when he’s posted at the border, Maj Arya said, ” I think, over the years, my family now understands the value of life and the concept of death. As for me I try to balance my commitment to my family and to my country.”