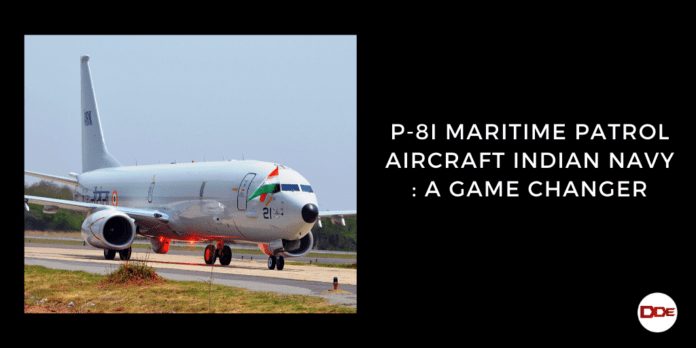 P8I Maritime Patrol Aircraft Indian Navy : A Game Changer. With the induction of advanced P-8I multi-role maritime ASW aircraft, Indian Navy has come to the forefront of aerial Anti-submarine Warfare (ASW), ensuring that the hostile neighbours reworked their underwater surveillance and intelligence gathering tactics. P-8I aircraft are true C4I (Command, Control, Communication, Computers & Intelligence) airborne platforms and a force multiplier for Indian Navy with its interoperability capabilities. These aircraft are efficient means to track ships and submarines, with an additional capability to hunt and destroy submarines.

P-8I maritime patrol aircraft is considered one of the best in its class with hi-tech gadgetry onboard and exceptional aircraft characteristics. ASW aircraft sometimes need to fly low for long durations for sonobuoy deployment or for Magnetic Anomaly Detector (MAD) operations, with low flying putting extreme stress on the aircraft’s airframe.

A submarine detection is a high air power-intensive role involving thousands of flying hours to cover a large area undertaking patrol patterns. With an increase in shipping traffic, the sea has become noisier and this underwater feature makes it easier for submarines to hide.

Indian Navy’s ageing Tupolev-142 (TU-142) and Ilyushin-38 (IL-38) and Dornier fleet required a rapid alternative despite the various upgrade of equipment during different Life Extension Programmes. The submarines technology have undergone a quantum advancement over a period, making them more silent (with techniques like Air-independent Propulsion or AIP) and possess long-range torpedoes. Such hostile submarines need to be detected and hunted down before they can cause damage to the Fleet ships. Maritime ASW patrol aircraft like P8I have the weaponry to search, track and sink an enemy submarine during hostilities. P-8I is multi-mission aircraft with roles like surveillance, EW and execute C4I capability through a dedicated tactical data link and inter-operability features.

How P-8I Aircraft do ASW operations?

The P-8I maritime patrol aircraft uses the highly reliable airframe of Boeing 737 and carries a flight crew of three members along with a complement of Naval Observers. Remarkably, though the aircraft is capable of flying at low altitude for longer durations for carrying out manoeuvres like sonobuoy deployment or MAD searches, but it usually operates at high altitude to achieve successful surveillance due to height advantage which is leveraged by powerful sensors onboard. Aircrafts exploits the thin atmosphere effect at higher altitudes to gain on longer ranges, and with in-air refuelling arrangements, P-8I can remain on its air station duty for prolonged hours. These capabilities make them well suited for operations over IOR oceans and for patrolling India’s 7516.6 km coastline and EEZ involving 13 coastal States and Union Territories.

The nose cone radar fitted onboard is a highly specialized electronics which has been designed specifically to handle downward-looking maritime and coastal areas. It can further undertake land-based surveillance also in an equally effective manner. The radar images are of such a high resolution that even a confirmed target detection can take place with a short time. The radar is capable of advance features like SAR (Synthetic Aperture Radar) and ISAR (Inverse Synthetic Aperture Radar)for the operator to select as per the environmental conditions. Most importantly, using an advance radar signal processing technique, even a periscope can be clearly detected for a submarine cruising underwater near the sea surface.

As a visual aid, the aircraft also carries a retractable electro-optic IR (Infra-Red) for heat signature detection. A state of the art EW suite fitted onboard the aircraft gives an exceptional ability to the crew especially when it comes to detection of any transmission in the electromagnetic domain and its further categorization and classification for identification. EW equipment onboard has been installed so as to provide full three-sixty degree coverage for ESM and other countermeasures like enemy jamming and cyber response.

P-8I is able to launch submarine detection sonobuoys, active or passive versions as per the mission requirements. Active sonobuoys have a trans-receiver system and passive sonobuoys are predominantly use listening hydrophones. Sonobuoys are highly sensitive underwater sensors that are capable of transmitting signals to P-8I aircraft for further signal processing using advanced real-time processors onboard. The aircraft can deploy more than hundred sonobuoys as part of ASW operations.

The P-8I ASW aircraft operates along with main Task Force, playing a vital role to safeguard capital ships and an aircraft carrier(s) from any type of submarine attack, whilst the ships are underway. The ASW aircraft form a barrier screen around the fleet task force through surveillance and sonobuoy detectors, this screen radius primarily decided by the hostile submarine’s torpedo range. The aim is always to detect an enemy submarine before it can fire a torpedo. After detection and classification of an enemy submarine, P-8I aircraft can attack and annihilate the submarine by launching its onboard torpedoes and depth charges.