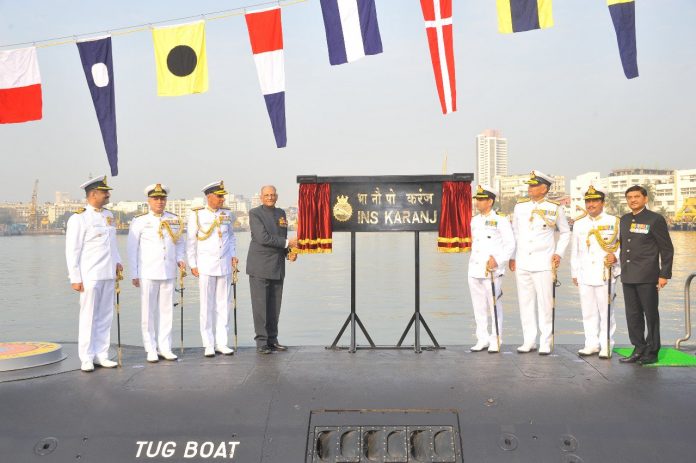 Indian Navy’s third stealth Scorpene class Submarine INS Karanj has been commissioned today at the Naval Dockyard Mumbai through a formal commissioning ceremony.  Admiral VS Shekhawat PVSM, AVSM, VrC (Retd), former Chief of the Naval Staff, who was part of the commissioning crew of the old Karanj and later the Commanding officer during the 1971 Indo – Pak war, was the Chief Guest for the ceremony. Six Scorpene Class submarines are being built in India by the Mazagon Dock Shipbuilders Limited (MDL) Mumbai, under collaboration with M/s Naval Group, France. INS Karanj would form part of the Western Naval Command’s Submarine fleet and would be another potent part of the Command’s arsenal.

Admiral Karambir Singh, Chief of the Naval Staff, and other senior officers from the Indian Navy and MoD were amongst the several dignitaries who witnessed the commissioning ceremony.  Crew of the erstwhile ‘Karanj’, a Russian origin Foxtrot Class Submarine which was decommissioned in 2003 were also special invitees for the ceremony. During his address, the CNS said “this impetus to Indigenisation & AatmaNirbharBharat is a fundamental tenet of Indian Navy’s growth story and future operational capabilities”.

The Chief Guest Admiral Shekhawat also highlighted India’s push towards AatmaNirbharta by saying “we live in an India launching numerous satellites, building nuclear submarines, manufacturing vaccines for the worlds – the new Karanj is another example of it”

Two Submarines of Scorpene-class INS Kalvari and INS Khanderi have been commissioned into the Navy in 2017 and 2019 respectively. A total of six scorpene class Kalvari series Submarines will be built by MDL, Mumbai. Scorpene-class Submarine INS Karanj was launched for sea trials on 31 January 2018. 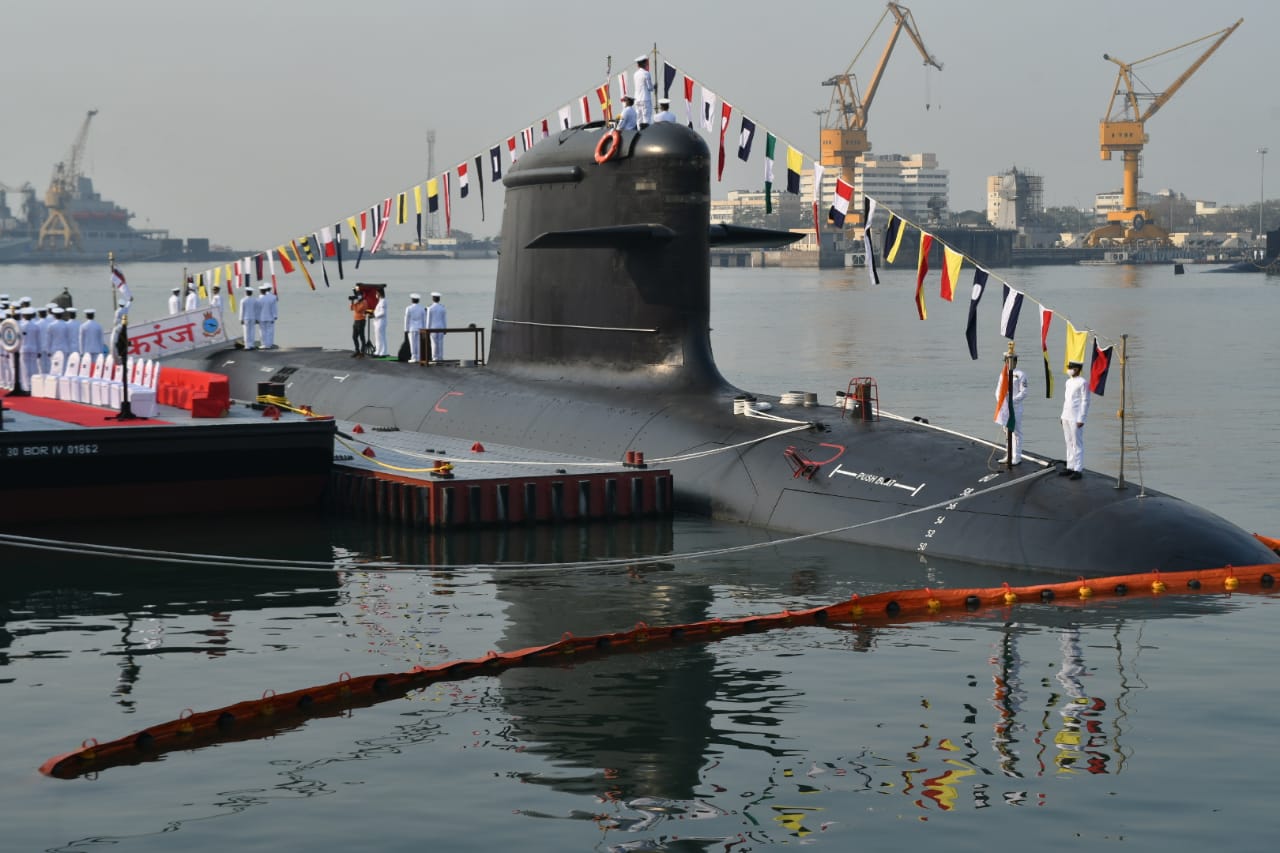 The next two Submarines of the Kalvari series INS Vega and INS Vagir are undergoing intense Sea trials and expected to join the Indian Navy soon. The last Submarine of Scorpene-class Kalvari Class Submarine INS Vagsheer is under construction and will be launched for sea trials soon. 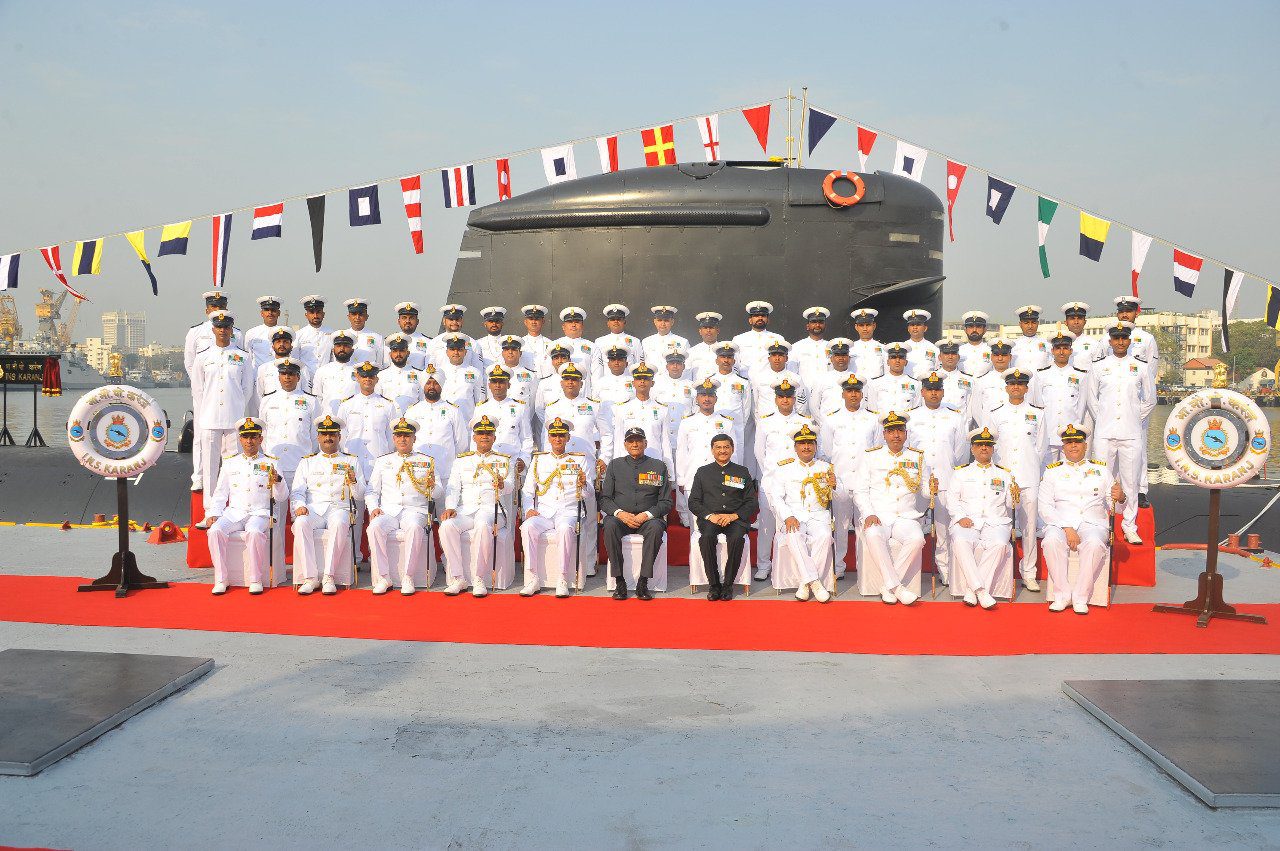 The induction of Karanj is another step towards the Indian Navy, consolidating its position as a builder’s Navy, as also is a reflection of MDL’s capabilities as a premier ship and submarine building yard of the world. Project – 75 also marks a critical milestone in the Yard’s continued importance in the field of Defence Production.