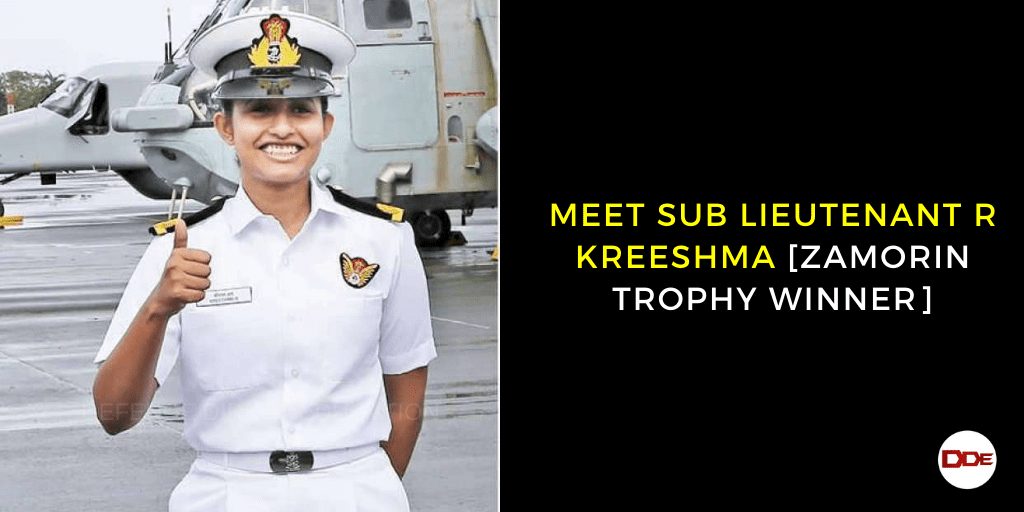 Meet Sub Lieutenant R Kreeshma who won the first Zamorin Trophy at Indian Naval Academy. Sub Lt R Kreeshma was over the moon as she was awarded ‘Wings’ on graduating as ‘Observer’ at a ceremony held at INS Garuda, the air station of the Navy at Kochi Naval Base on Monday. She also won the Book Prize after being adjudged ‘Best in Overall Order of Merit’ from the Short Service Commission Observer course batch.

“My ambition was to be a pilot in a combat role. However, as I didn’t have the required height to join as a pilot, I explored other possibilities and found the role of observer best suited for my goal. The observer will be trained in navigating the aircraft and controlling weapons and sensors. Besides, we get trained in operational mission tactics. My father readily agreed when I expressed my ambition to join the Navy,” said Kreeshma. Kreeshma hails from a middle class family at Kadampazhipuram, a village in Palakkad.

Her father A M K Ravikumar is a pharmacist and mother Indrani is a housewife. Kreeshma completed her BTech in Electrical and Electronics Engineering after which she joined the Indian Naval Academy (INA). She passed out from the prestigious Indian Naval Academy in May 2019. Kreeshma won the ‘Chief of the Naval Staff Gold Medal’ for the Naval Orientation (Regular) Course and the ‘Zamorin Trophy’ for the best women cadet (instituted for the first time).

“After passing out from INA, I joined the observer course where I underwent training in fixed wing aircraft. After completing 60 hours of flying based on assessment and preference, I was given an individual aircraft. Personalised training will continue based on the aircraft assigned to us,” she said. Kreeshma will now be joining INS Rajali, the Naval air station at Arakkonam. As many as 89 women have joined the Navy as observers so far of which 72 are in service.