Why Life Of Army Officer Is More Stressed Than Other Ranks 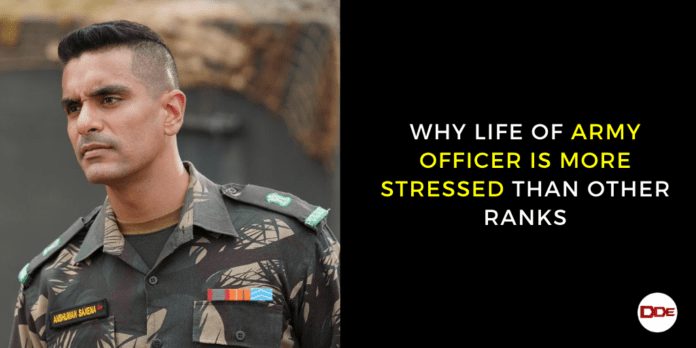 Why Life Of Army Officer Is More Stressed Than Other Ranks

While the Indian Army personnel have moderate levels of occupational stress, the levels of psychological well-being and quality of life amongst the rank and file is good, a new study undertaken by the Defence Research and Development Organisation (DRDO) has revealed.

Moderate stress levels can be due to the strenuous nature of work, role ambiguity, frequent postings, separation from families and danger/threat amongst various other reasons. The usual demands of multiple deployments exposing the personnel to regular stressful conditions have shown enormous deterioration in psychological and physical health conditions including, lower morale, more mental health problems, and more stress-related work problems, according to the researchers.

“The Indian Army’s role is to protect the whole nation and not an individual or a group, by ensuring national security and national unity, by defending the nation from external aggression and internal threats, and maintaining peace and security within its borders. The great importance of this duty puts tremendous stress on army personnel. Recent media reports indicate over four times more soldiers die battling stress rather than fighting militants in North-East or Kashmir,” the study says.

The respondents for the study were 150 male personnel aged between 25 to 45 years who were posted in one of the largest training centres of the Army and have had experiences in field and counter-insurgency areas. These included 50 officers, 50 junior commissioned officers (JCO) and 50 non-commissioned ranks.

“One of the reasons of the above findings might be an officer holds a position of authority and therefore has more work responsibility and management responsibility as compared to JCOs and non-commissioned personnel, leading to higher levels of stress,” the study states. “Moreover, officers are responsible for decision making, planning, and execution of various activities. In the Indian Army, JCOs have longer years of service than officers, due to which officers accord JCO’s great respect and have a great amount of influence in their welfare and morale. Hence JCO’s have lower occupational stress level than officers,” the study adds.