Steps Taken By Government For Modernisation Of Defence Industry 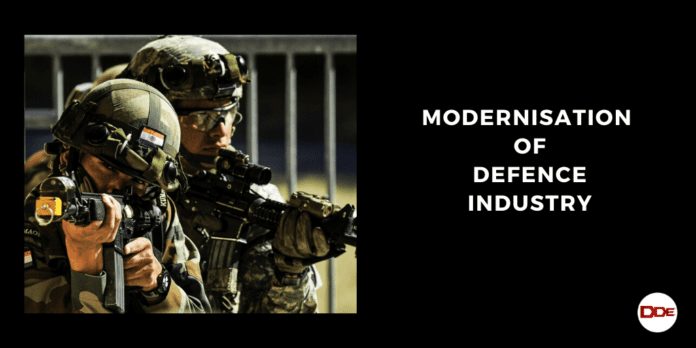 Steps Taken By Government For Modernisation Of Defence Industry

Steps Taken By Government For Modernisation Of Defence Industry. The following steps have been taken by the government which would help in bringing in critical technologies and modernize the Defence Industry in the country:-

Defence Procurement Procedure (DPP) has been revised in 2016 wherein specific provisions have been introduced such as ‘Buy Indian Designed Developed and Manufactured (IDDM)’ for stimulating growth of the domestic defence industry.

Government has notified the ‘Strategic Partnership (SP)’ Model which envisages establishment of long-term strategic partnerships with Indian entities through a transparent and competitive process, wherein they would tie up with global Original Equipment Manufacturers (OEMs) to seek technology transfers to set up domestic manufacturing infrastructure and supply chains.

‘Buy & Make (Indian)’ category of procurement under DPP-2016 provides for initial procurement of equipment in Fully Formed (FF) state in quantities as considered necessary from an Indian vendor engaged in a tie-up with a foreign OEM, followed by indigenous production in a phased manner involving Transfer of Technology (ToT) of critical technologies.

‘Buy & Make’ category of procurement under DPP-2016 provides for initial procurement of equipment in Fully Formed (FF) state from a foreign vendor, in quantities as considered necessary, followed by indigenous production through an Indian Production Agency (PA), in a phased manner involving Transfer of Technology (ToT) of critical technologies.

Foreign Direct Investment (FDI) Policy has been revised and under the revised policy, FDI is allowed under automatic route upto 49% and beyond 49% through Government route wherever it is likely to result in access to modern technology or for other reasons to be recorded.

In addition to above, following initiatives and schemes have been initiated to contribute toward modernization of Defence Industry:-

Innovations for Defence Excellence (iDEX): The objective of iDEX is bringing startups to innovate, develop technology and solve problems related to defence and aerospace. The initiative is being implemented by Defence Innovation Organization (DIO), a Section 8 company founded by BEL and HAL. DIO has initiated activities in 2018/ 2019, running Defence India Startup Challenges (DISCs), and outreach activities to activate the Indian startup ecosystem for defence.

In May, 2001, the Defence Industry Sector, which was hitherto reserved for the public sector, was opened upto 100% for Indian private sector participation, with Foreign Direct Investment (FDI) up to 26% both subject to Licensing. Further, Department for Promotion of Industry and Internal Trade, Ministry of Commerce & Industry has allowed FDI under automatic route upto 49% and above 49% through Government route wherever it is likely to result in access to modern technology or for other reasons to be recorded. Till date, 43 FDI proposals/ Joint ventures have been approved for manufacture of various defence equipment, both in public and private sector. Till February, 2020, Government has issued 464 licenses to Indian Companies for manufacturing of a wide range of defence items.