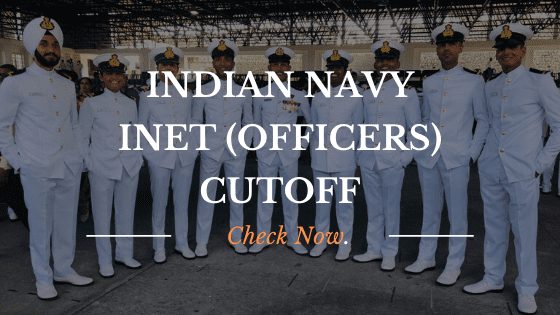 In this article we will discuss the Indian Navy INET 2020 (Officers) branch wise and sectional cutoff. The INET exam was conducted on 08 February 2020 at various centres across India. The India Navy revealed the individual cutoff of each and every branch along with the sectional cutoff.

The cutoff for the course commencing from Jan 2021 at Indian Naval Academy is given below:

The selection procedure for various posts offered by Indian Navy is as follows:

1. INET: The Inet notification is released twice a year. Candidates who will successfully submit their application form on time will appear in the Indian Navy Entrance Test. Indian Navy Entrance Test (INET) is expected to be conducted at one of the INET centres as per their choice, subject to availability of slots at that centre. Only Electronic mode of communication will be used while contacting the candidates at all stages of selection.

SSB interviews for short-listed candidates will be tentatively scheduled from April/May 2020 at Bangalore for pilot & observer candidates and at Bangalore/Bhopal/Coimbatore/Visakhapatnam/Kolkata for other branches/ entries. Shortlisted candidates will be informed about their selection for SSB interview on their e-mail or through SMS (provided by candidates in their application form). Candidates are advised not to change their e-mail/mobile no. till the selection process is over.

4. Merit List: Merit list will be based on combined marks of INET & SSB. Candidates recommended by the SSB and declared medically fit will be appointed for training as per all India merit of each branch/cadre based on the availability of the number of vacancies in various branches/cadres.