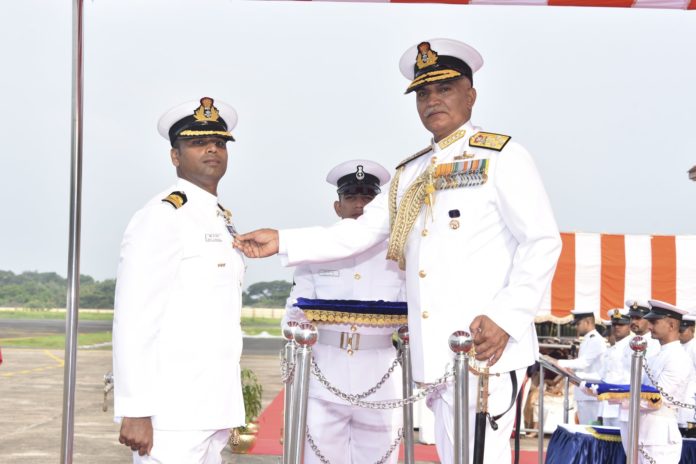 The Naval Investiture Ceremony – 2022 to felicitate Naval personnel who have demonstrated gallant acts, leadership, professional achievements and distinguished service of high order was held at Naval Base, Kochi on 04 May 22. Adm R Hari Kumar, Chief of the Naval Staff (CNS) on behalf of the President of India, conferred the Gallantry and Distinguished Service awards to the recipients during the investiture ceremony.

During the ceremony, a total of 31 medals including six Nao Sena Medal (Gallantry), eight Nao Sena Medal (Devotion to Duty), 17 Vishisht Seva Medal were presented to the awardees. In addition, the Sarvottam Jeevan Raksha Padak (posthumously) was also presented to the Father of Ramavtar Godara, COM I (EW) who had made the supreme sacrifice while attempting to rescue an unknown individual drowning in a water reservoir in Nagaur district, Rajasthan on 10 Aug 20.

The CNS Trophy for Best Green Practice 2021 was awarded to INS Eksila and INS Hamla in the Industrial and non-industrial categories respectively.

The unit citations for shore establishments were awarded to INS Angre, NSRY (Port Blair), INS Dega and INS Hamla that delivered exceptional performances over the past year.

The ceremony was witnessed by the spouses and families of awardees and by a number of senior dignitaries of the Indian Navy as well.